Well I now have power once again in the car, but not much to cross off my “to do list”. And only 3 more weeks till the car has to be ready for Japfest 2010 :o 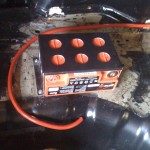 I then mounted the distribution box under the bonnet (this will connect the battery cable directly to the fuse box, starter motor, and alternator. I then ran the power cable through the fire wall and into the cabin and ran this down the passenger side until it reached the boot. I attached a 100amp fuse as close to the battery as possible (right on top) this will switch off in case any shortage happens. This is also handy for turning everything in the car off. 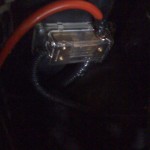 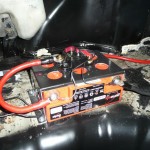 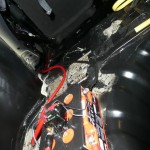 Started the car straight up and everything worked fine :)  quite a bit of smoke from the bonnet due to the heat wrap bedding in (had to open all the doors in the garage to clear the smoke) – Waited till everything warmed up until turning the car off, Oil Pressure works spot on, Oil temp works, seems to idle a bit strange though, going up to 2k revs and once revved goes down to 1k – But i think that may be down to it not being started for a few months

*Rant* Why did Subaru make the oil dip stick so hard to read on the Impreza… its as if the dip stick tube is coated in oil so as soon as you put the dip stick in, oil goes all over the dip stick and you don’t get an accurate reading *Rant over* – So I think I may have a little bit too much oil in the car, but cannot tell as I cannot see a line. Will check it again next week.

I finished removing the sound deadening from the rear seats, and painted it, along with the boot and wheel well: 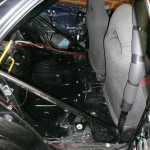 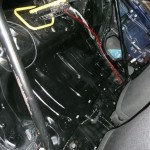 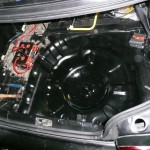 I will be moving the washer bottle into the boot too (as I have mounted the distribution box where the washer bottle would usually go) – Will get some new washer hose from work and connect it all up next weekend I hope.

Got Sarah to tidy the inside of the car up a bit too, put bolts and bits that were laying around into a box in case I need them for a later date. 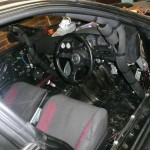 I then went to try and fit the adjustable top mounts onto my Eibach coilovers, only to find the top bolt on the Eibach coilover was too small for the Cusco Top Mount bolt, which means these are no good to me :( – Looks like I’ll just have to stick to camber bolts.

I also got a quality purchase today…. its big and blue, but I will need to find another one… Well if you had not guessed, I got a Cobra Bucket Seat (Brand New) for…………… £20 :D 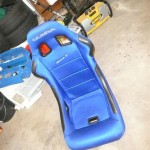 I Just Sold My Old Car And Made A Profit! Here’s How I Did It →