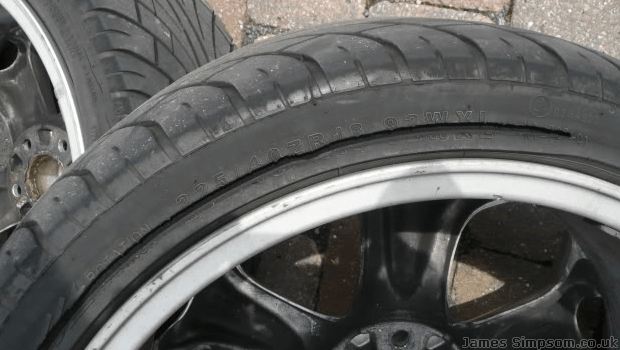 Summary: Do not buy these, they WILL kill you

Just flicking through my old pictures on my PC when I came across the pictures of the tyres that came fitted to my ST Alloy Wheels when I first purchased them.

At first, I thought the tyres were ‘alright’ in the dry, but as soon as the road becomes damp, the car under-steered on sharp corners and roundabouts at low speeds, these tyres will certainly find your car a nice ditch to take a closer look at.

Anyway, after checking over the tyres one weekend, I noticed this had happened to one of the tyres – This was after having the wheels fitted for no longer than a couple of months:

As you can see, the rubber had started to separate from the inside wall of the tyre. So I quickly inspected the other tyres (as they were all Kings tyres) and they were even worse than the one above, shocked was not the word to describe what I thought.

So they were sharp removed and replaced with a decent set of Avon ZZ3’s. I decided to write about them after not finding any reviews on the tyres on the net, so if you are looking at buying Kings Tyres while looking for budget tyres, avoid like the plague, these were not far from a blow out. These are quite cheap to buy from the internet, and now I see why these are so cheap.