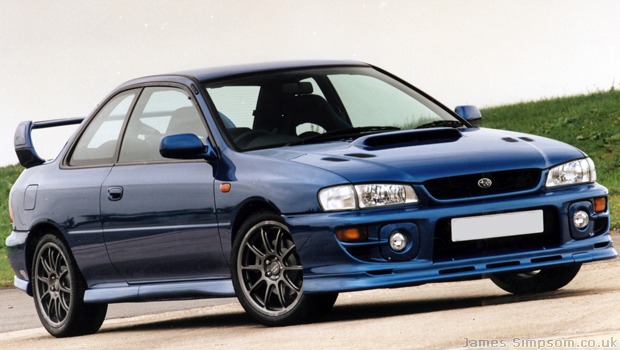 So after taking my car for a remap, and finding the car miss fires badly under any sort of decent boost load, I was told to take the car away and fit some Subaru Impreza New Age Coil Packs onto my classic. These new coils are supposed to be much better then the classic version (possibly because they are newer, and more efficient then what was fitted to my 1993 Impreza) – After fitting the new coils, the car runs so much better, no hint of miss fires even on tick over, so this modification is a must do for any classic owner.

After taking the old coils out, I could see why it was miss firing, the usual split plastic on the end of the coils shows they are past their sell by date

So to change these out dated coil packs for some newer “newage” coil packs, you will need, odviously, newage coil packs – Now try and get these with wiring looms attached, as it makes life so much easier to just wire these up, else you’ll have to solder or make your own connectors for each of the 3 pins on the newage coil packs.

You will need to cut the wiring harness off your old coil packs (will call these pig tales), and strip some wires off the end of the pig takes – You can do as I have done, and use bullet connectors to do this job, or solder works just as well:

Also strip back the three wires on the newage coils. On each of the new coils, you will have a black wire, which is your earth, a red wire (which is your 12v) and another colour wire (these are different on each of the coils for some reason, but these wires are your signal / firing wires) – As the old coils do not feature a earth wire, we will need to earth this to the bolt that holds the coil onto the head of the engine, I just used a ring terminal – which I found works the best (made this wire a bit shorter and curled it around to the bolt – as pictured below)

Your coil packs can then be fitted into the engine, but you are not finished just yet – as the classics used an external ignitor to create the high voltage that is required to create a spark (the ignitor is built into the newage coils – so a bit of weight saving here – all of a few grams).

*note, the coil on the passenger side back is a little tricky to get in, but if you put the coil in upside down at an angle, you can get it in, then turn it back the correct way

The igniter is hidden behind the boost control solenoid (on the left hand side of the engine bay attached to the front strut housing) – Three 10mm bolts hold this bracket on, and this allows you access to the igniter. Now there are two types of igniters on the classics, one which seems to only be featured on MY93 cars (1993) – Silver metal igniter, and the other on all the other classics (before the single coil classics came in) – black plastic igniter.

Now both these igniters have been wired up slightly differently – well one wire is different. Both igniters have an earth wire, which will no longer be used, on the 93 metal igniter, the earth wire is pin 1, where as the plastic igniter is pin 3.

The best way to figure this out, is to remove the plugs and wire them as if there was no igniter ever there. For example, on my 93 metal igniter, the picture on the left shows the wiring harness coming from the ECU, this features 5 wires (pin1 Black, pin2 Yellow with Green Band, pin3 Green with White Band, pin4 Red, pin5 Black with Red Band) and the picture on the left shows the wires that come out of the igniter directly to the coils – this is the signal wire telling the coil pack to spark (pin1 Red with Green Band Band, pin2, Blue pin3 White with Red Band, pin4 Blue with Green Band):

Like I said previously, you have to wire this as if the connectors were not there…. So pin1 of the ecu side wiring harness is your earth (this has 5 wires, where as the coil side wiring has 4, but removing the earth wire, you now only have 4 on the ecu side now)….

So your wires should go as follows (have included the colours, so its just a case of matching the colours)

The same principal above goes with the plastic ingiter, but instead of ground being pin1, ground is now pin3 (colours are exactly the same)

Should You Get a Personalised Number Plate? →

Buying A Car – Reasons For Buying Used vs New →

5 Gadgets For A Safe And Leisurely Drive →