Back on the car this weekend – was supposed to be doing marshal training, but looked out the window and saw all the snow and decided against it (it was cancelled in the end anyway)

Now that the sound deadening has finally been removed, I can finally get started with the Hammerite Satin Black spray paint (I don’t know why but every time I see satin black I think of Edd China (Wheeler Dealers))

For those of you who don’t know how to remove the ABS and what is needed to put an adjustable BIAS / Proportioning valve in, here’s a quick explanation

With the above in mind, I wanted to keep as much of the existing pipe work in place. as i possibly could, so I made a start of the ABS removal, and what a pain in the arse that was… The standard nuts didn’t want to budge, it was supposed to be a 10mm, but was a little too big and managed to round off the nut, so ended up going imperial with a hammer and got them loose that way (should have got myself some decent brake line spanners.

The other line that runs to where the ABS module can stay as is, but will need to be bent to allow you to T-Piece all three front pipes together. 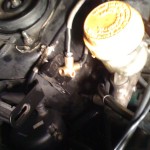 Next on the list is to fill the brakes back up with DOT4, and do a gravity bleed on them (just learned about gravity bleeding, so thought this would be a great opportunity to test it out)

Need to fit my new brake pads (2 min job, as I’ve already removed the passenger side)

Need to finish putting all the dash components back together, and steering wheel and seats back in the car.

And give the car a good wash for my secret wrap :D

4 Reasons Why Every Man Should Try Fishing →

Gifts For Men – Cars And Cricket! →

Tips To Help Improve Your Appearance →