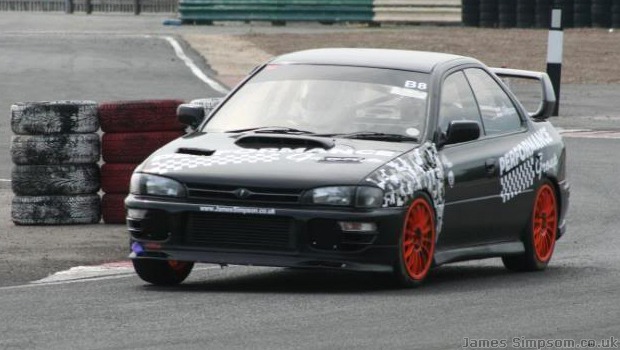 Well the car was not running right still on the Saturday session at Croft. The car wasn’t boosting right, as it was only producing 0.50-0.60 bar of boost, but I ignored it and tried to have fun on the day (I was surprised that I was keeping up with a fair few turbo cars, and passing the odd one or two).

Anyway Sunday came, and I went out on track for the first session of the morning with Luke, and while we were driving he asked me if I had checked the actuator / waste gate, which I had not checked at all (as I didn’t really think anything could have gone wrong here – was thinking it was more to do with the chip fitted)

Anyway, pulled back into the pits, out with the torch and low and behold, the actuator rod had disconnected its self from the waste gate, which meant the waste gate was staying open as soon as the car boosted up. It seems as if the split pin that was holding the actuator rod on the waste gate had fallen off somewhere, so rushing around the pits/office trying to find something to fit the hole and some water to cool the turbo down so, i came back with one paper clip and some bottles of water.

10 bottles of water later, the turbo was cool enough for me to put the rod back onto the waste gate and just in time for my next session and WOOSH! the car was producing 1.1 bar boost :D – Thank god the car is working as it should be (finally), but my happiness was soon interrupted by a heavy down pour which means i could only open her up on the straits. and the windows started to steam up after 3 laps.

4 Reasons Why Every Man Should Try Fishing →

Gifts For Men – Cars And Cricket! →

Tips To Help Improve Your Appearance →