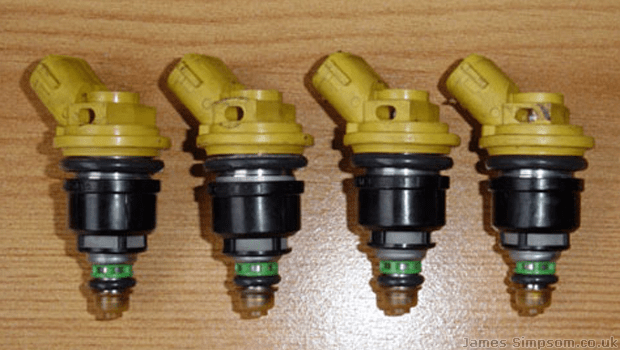 So what is the theory about modifying the injectors?
Basically, some injectors have a cap that has been welded over the top of the injector to reduce the flow, for example the injectors below (550cc STI Pink Top Feed Injectors), you can clearly see there is a cap welded over the top. This can then be removed using a Dremel (grinding the weld off and removing the cap) and in theory should produce around +-730cc

380cc & 440cc Side Feed Injectors (Phase 1)
So far I have looked at the standard Phase 1 380cc Injectors which are fitted into an import WRX Subaru Impreza (1993) and have found these CANNOT be modified with the Dremel technique. The image below shows a standard injector (on the left) and the injector with the plastic sleeve removed (on the right) – It looks like there is a cap at the bottom of injector, but this is all one piece and cannot be removed. The Phase 1 injectors has a little pin at the bottom of the outlet, which I think goes into the injector a little when it receives a current (will check this with a battery later), this pin as a round V shape, which will help produce a perfect O spray into the inlet.

The above injectors are 380cc injectors, but the 440cc phase 1 injectors are exactly the same as above (but with a yellow top) – See image below from Carl Davey website:

380cc & 440cc Side Feed Injectors (Phase 2)
These are what I need to test next, the image below shows something that looks like there is a cap on the bottom of the injector (no pin/needle in site), so these are what I will be taking a closer look at next.

These CAN be modified by removing the cap that has been welded on to the outlet of the injector, as you can see from the images below the cap is clearly welded on, removing the weld with a little rotary tool (Dremel) will release the cap. This can be done by making gently making the weld flush against the injector. Once the cap falls off, using fine sand paper remove any burrs and clean up the injector (carb cleaner) – Once this mod has been done, i would suggest getting the injector cleaned, and NEEDS TO BE FLOW TESTED – The final image shows a set of top feed injectors with the cap removed